Blood on the Pages 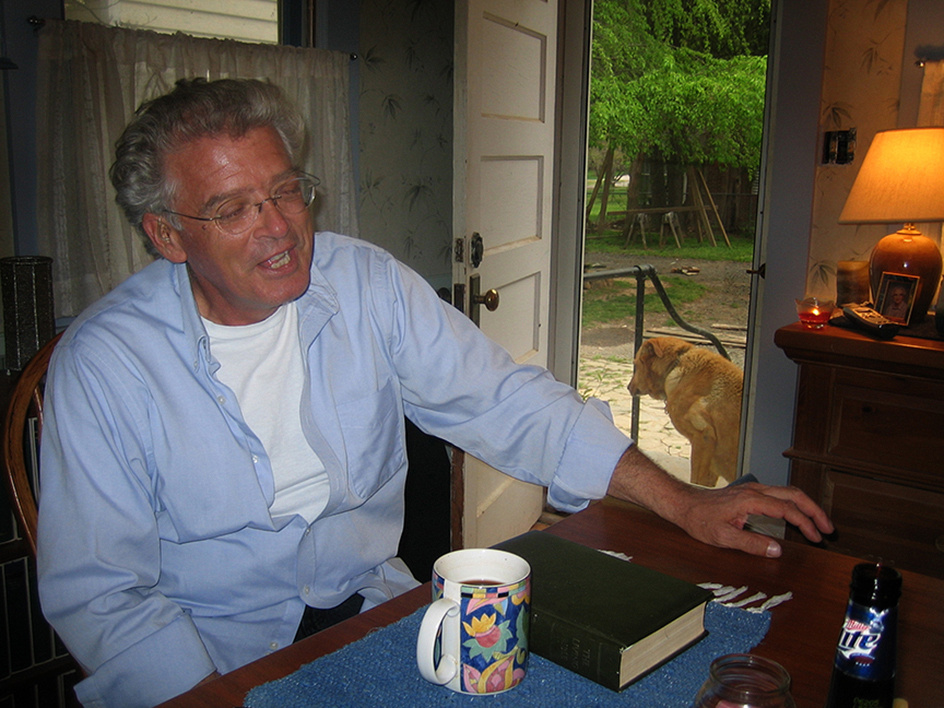 Over the years, my friend Guy Neal Williams has introduced me to many things that remain important parts of my life to this day. He is the one who first put a fly rod in my hand, teaching me the basics of how to cast at a pond near his Winston-Salem home, and triggering in me a lifelong passion. He convinced me that I could create woodcut prints despite having no carving or printmaking experience. He shared books that remain on my shelf today and music that has shaped everything I now listen to. He loved music so much. The fact that he was nearly deaf was such a cruel injustice. But his greatest gift was the first thing I knew and loved about him: Guy was a storyteller.

A strong voice, an easy laugh, an infinite supply of stories and a deep desire to share them made Guy a human campfire. Friends and strangers alike would gather around his warm glow as he weaved truth with fiction, humor with sadness. His spoken words were slow and deliberate. When I first met him I was enthralled. The topics of his stories didn’t even matter. Potato guns. Cave paintings. Fish. He told me once in great detail how to prepare carp on the grill. The process entailed soaking a cedar plank in saltwater, wine and peppercorns, carefully filleting and seasoning the fish just right. He told me exactly how the coals should look and when to know the fish was ready. When it was done, he instructed, “carefully slide the fish into the trashcan and eat the plank.”

His real talent, though, his genius, was in his written word. Here, too, he was a storyteller. Okay liar. He was a liar. I was tempted to say lying was like a game to him, but somehow that doesn’t give it the necessary respect. You wouldn’t go to the Masters in Augusta and tell the greatest golfers in the world they were merely playing a game. No, lying to Guy was a sport. And he was a hall of famer.

He used to like to challenge his friends by writing three essays. Each was skillfully crafted, impeccably detailed and utterly unbelievable. But only one, he warned, was a lie. The other two were true stories. It was impossible to discern fact from fiction in these tests, as his astonishing gift of storytelling was equaled only by his impossibly colorful real life experiences.

My God he loved a story.

He had the ability to paint a scene, to put you in it, to lead you down whatever path he wanted you down, then jump out from behind a bush of his own creation and punch you square in the gut. I had never seen, or even imagined, that someone with world-class writing skills would use so much of that power to simply entertain his friends. We all wanted him to write a book. Not so much because we needed more of his stories, but I think because we felt his stories needed a bigger audience. But a bigger audience isn’t what he was after.

He once told me a story that I cannot repeat here. (Okay he told many stories I cannot repeat here, but that’s not what I meant.) It involves a tattered photograph and a legendary fish. The story is so fantastic it almost certainly can’t be true. Yet it contains enough verifiable details that it just might be. It involves a secret so sacred that it must now remain with me until I die. It’s hard to explain how, or why, he did this. But he told a Perfect Story, a spectacular story, a story he could have easily published anywhere, but one that could never be shared. I instantly regretted having been told it. If it’s a lie, it’s an epic masterpiece. If it’s true, I wish it had died with him. But he told it to me and asked that I never tell anyone. Hell, who knows. Maybe he privately told the same story to everyone. But I’ll keep his secret, true or not, and the burden of not telling a soul will be a reminder of his gift to me.

I never thought about writing before I knew Guy. But being exposed to his words made me think for the first time about putting down my own thoughts. I found myself writing for fun, trying to find words to describe a scene or person or feeling. I wrote with more care, more effort. Perhaps most importantly, I didn’t save that care and effort for particularly important topics. I learned through Guy that there is great value in taking the time to describe the smallest observations. My early attempts were just an awkward mimicry of his writing. But I like to think that along the way, I found my own voice, my own passion for spinning a yarn, my own desire to lead someone down that path. Guy taught me that it is a noble pursuit to sweat over choosing the right words, assembling those words into sentences, sentences into paragraphs, paragraphs into stories, for the pure joy of it. Just to make someone laugh, or cry, or to simply relate to a shared experience.

“Books are better,” he said once in response to a movies-versus-books discussion. “Books are better because there’s blood on the pages.” Movies, he said, are creative endeavors by committee, and as such were diluted. But books, written in excruciating isolation, were painful pursuits. He wrote of pain. He wrote of burying his beloved dog, Augustine, until you swore you could feel the worn shovel handle in your hands and smell the moist clay through your own tears. There is blood on those pages. He wrote of love. I’ll never forget the first description I ever read of his wife, “a tiny engineer with ice blue eyes.” Jesus, it’s probably been twenty years and I know with certainty those are the seven words exactly as he wrote them. But mostly he wrote of beauty. The beauty of the natural world, or the human spirit, or math, or science or enduring friendship. Of music. Beauty, to Guy, was everywhere. But he wasn’t just an observer of it, he created his own beauty from whole cloth.

He loved art, numbers, music, friends, bullshit and cigarettes with limitless enthusiasm. He was a genius. A spectacularly flawed genius, but a genius. He had his share of demons, and took on a few extras to make it a fair fight. The demons are all silenced now, and I hope to God that silence is forever filled with music, clear and bright and loud.

This morning, the first of my days on an earth without Guy Neal Williams, I plugged my phone into the car stereo. The first random song that played was a Patty Griffin song I thought a lot about yesterday. I have a thousand songs on my phone and this played first. Thank you Guy for your friendship, I am different and better for it. And thank you for your words. All of mine have you in them.

The song is Goodbye.

Today my heart is big and sore,
It’s tryin’ to push right through my skin.
I won’t see you anymore,
I guess that’s finally sinkin’ in.

Joel Thompson(non-registered)
Damn. What a tribute. Guy would most certainly be proud of your writing. I love reading your stuff for the very reasons you described. Sorry for your loss, brother. He will forever be in your words!
No comments posted.
Loading...
© Ed Felker
Powered by ZENFOLIO User Agreement
Cancel
Continue