Bring Me A Dog 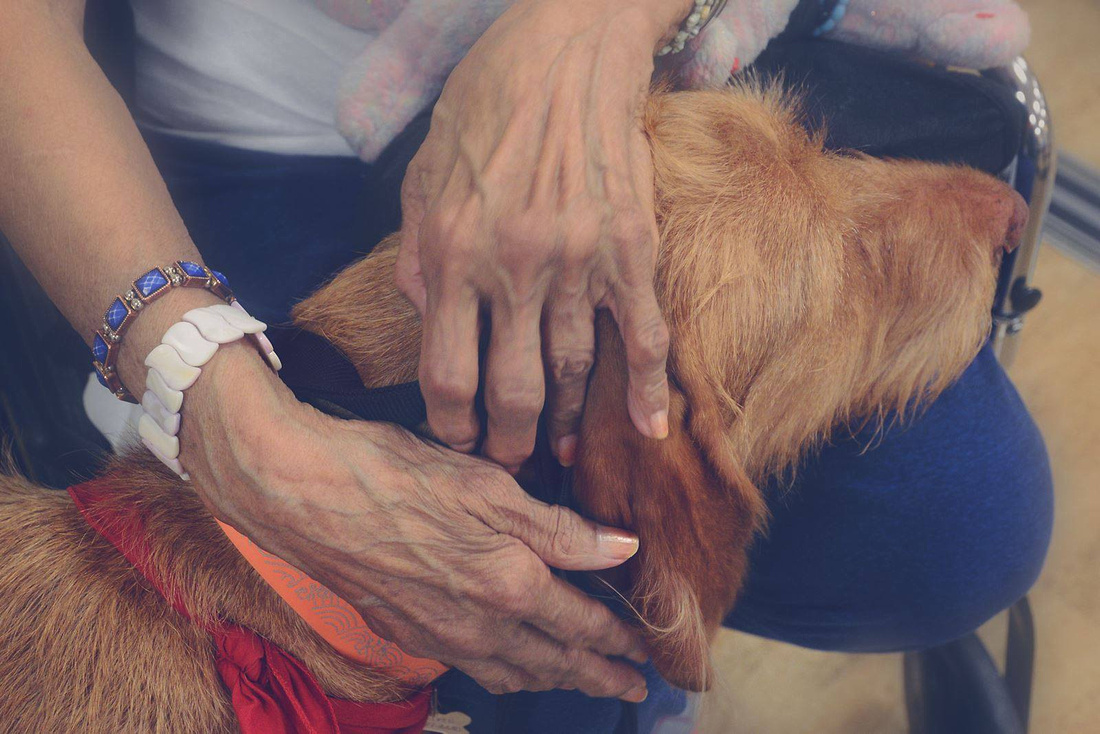 Bring Me A Dog

A couple years ago I walked around a festival in Richmond with my friend Jay and my Wirehaired Vizsla, Finn. We had all run together in a mud run/5K and were enjoying post-race beers and people watching. I started noticing it for the first time then, that people gravitated toward Finn. Sometimes seemingly without knowing it, they would veer slightly as they walked toward us, close enough to absently run fingers down his back as they passed, or they would rest a hand on his head as he stood next to them in a beer line. He was popular, and countless people asked about him or complimented him, but these subtle gestures were somehow more special.

At a local festival this spring, a young girl with Down Syndrome knelt in front of Finn in the grass. He sat quietly as she hugged him and whispered to him for a long while. Finally separating, she called to her Mother, “Mommy this dog loves me!” She was not lying.

This summer the young son of a friend met Finn out in public and put his hands on the sides of Finn’s head and said quietly, not for me to hear but just for Finn, “I love you, too.”

The more time I spend with this dog, the more I realize how selfish it is for me to keep him all to myself. If ever there was a dog perfectly designed from scratch to be a therapy dog, it is Finn. We studied, we took the test, we filed the paperwork with Therapy Dogs International (TDI), and Finn became a certified therapy dog.

I contacted a nearby facility that is already familiar with TDI, a nursing and rehabilitation center, and on National Dog Day, of all days, we arrived for our very first official visit. Half of us were nervous.

The staff could not have been more welcoming, and knowing they were aware this was our first visit put me at ease. I can’t take photos of patients and don’t want to discuss even in vague terms the types of afflictions and disabilities we encountered there, but it warmed my heart to see that dogs are blind to everything but a person’s heart and soul. We visited with ten or twelve residents in the dining hall, and what I saw and heard in that room made me more proud than I can ever remember being of anything my entire life.

Finn stood quietly as we waited and moved out of the way in hallways and elevators. He sat next to people in wheelchairs and moved closer when they could not reach him. He refused food offered to him despite being inches away from a bowl of fruit. He laid his head down sideways on laps and stayed there for easy petting. He sat still patiently when one woman could barely move her hands enough to rub the back of his neck. He shook hands to the great delight of one resident, who made him repeat the trick for those in the room not paying adequate attention the first time. He filled the room with curiosity and laughter and conversation, about his name, his breed, his handsomeness, his disposition, his eyes. He started people telling stories about dogs in their lives, dogs long gone.

I don’t know what the future holds for me. But if I live longer than I think I will, and one day find myself in a dining hall like the one I was in today, for the love of God, someone, please, bring me a dog. Bring me a dog that sits still for a pat on the head and reminds me with a nudge when I forget to keep patting. Bring me a dog that leans in my lap and wags his tail with the slightest touch or softest word. Bring me a dog that somehow makes me feel more loved than anyone else in the room, then moves to the next person and makes them feel it too. Bring me a dog that makes me remember what it feels like to share years with the very special dogs that warm my feet and fill my heart this very moment.

Bring me that, and I can go in peace.

Jo Newson(non-registered)
So beautifully written and yes, I had watery eyes at the end. Both of you keep doing what you are doing so well. Hugs and an ear scritch from the UK. (Please feel free to allocate the "hug" and "scritch" to the party who you think will like it the best ;) Jo
No comments posted.
Loading...
© Ed Felker
Powered by ZENFOLIO User Agreement
Cancel
Continue