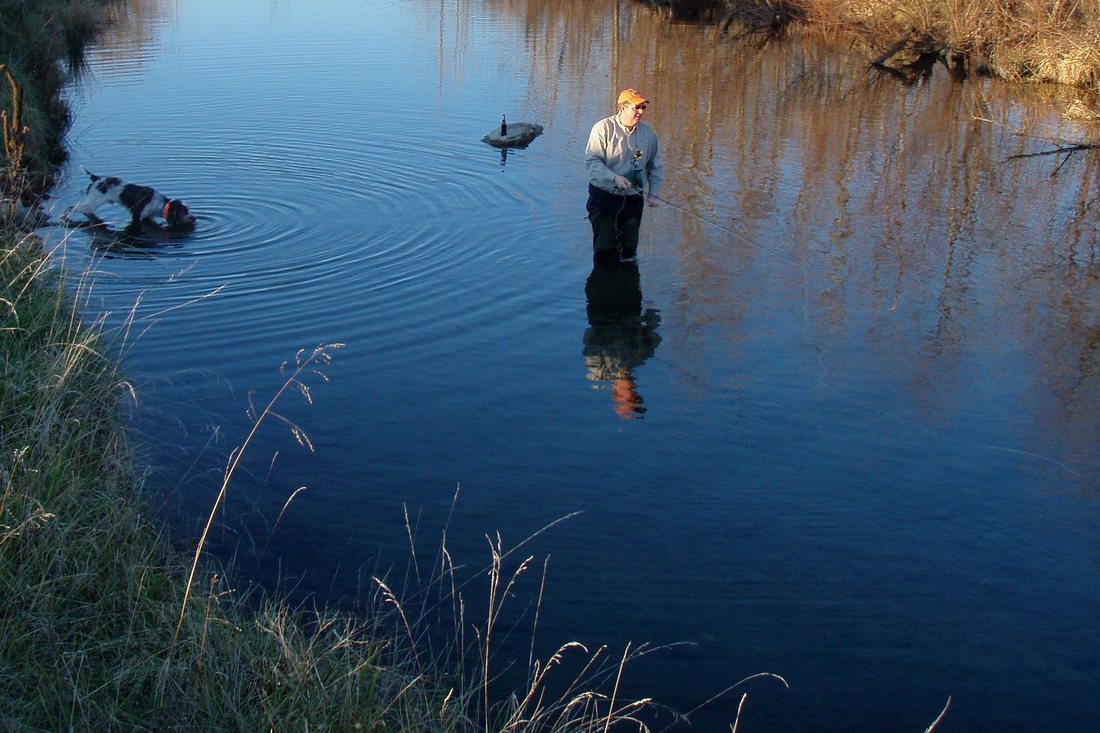 The moment the camera shutter closed on this image from the banks of the Rose River might just be when it all started.

My friend Douglas casts for trout as the sun sinks low in the November sky. A warm day. A cold beer. An azure blue sky reflected in water interrupted only by a series of circles reaching out to Douglas from its source: A dog.

It was there, and it was then, that I first observed my friend and his dog Enzo, a lanky young Spinone Italiano. I watched Enzo explore that farm, chasing birds and sniffing trails and running and running and running. I saw the freedom given him by Douglas to roam, and the discipline given him to faithfully return with a simple command. “Here.”

Faithful. This, I thought, is what I want.

Although my wife and I had moved to a rural area, we still lived in a house on a main road with a yard. We were surrounded by country, but not yet immersed in it. So it was just a fantasy, to have a dog that roamed the property, never too far to hear my call. But my next dog, while not a Spinone, did have a beard and bird hunting in her veins like Enzo. Over time, Winnie’s beard grew, but the bird hunting in her veins faded, and that’s alright. We did get that place in the country where dogs can run free, though.

Enzo went on to be a fixture at the farm, and in the life of my friend. They hunted together, fished together and traveled together. I was privileged to take a few long road trips with Douglas and Enzo, to hunt grouse and woodcock in the dense woods of Michigan and Maine. Enzo earned the sleep he soaked in on those return trips.

But the farm is where Enzo was truly at home. When Winnie was a puppy, Enzo showed her how to run off leash for the first time. When I added Finn a couple years later, Enzo showed him how to find a chukar at a nearby preserve. Finn and Enzo were two peas in a pod. Tall, dorky, sweet as molasses and just smelly enough one could convincingly blame the other. They napped in front of that big, hot, stone fireplace after a day of running like there’s no tomorrow.

And once in every life, there really is no tomorrow. And sometimes you never see it coming. It’s almost impossible to believe that Enzo is gone. That he has pointed his last bird, lapped up his last cool drink from the gin clear Rose. And it feels like I owe him something. And it feels like I owe my friend something too. The two of them showed me what that relationship between man and dog could be. My pair roams the property now, never too far they can’t be called in. They explore scent trails, kick up birds, point rabbits and roll in God knows what. And when I’m out mowing or trimming or repairing a fence or walking in the woods or fishing in my home river, they are by my side. And when I say “Here,” there they are. Faithful. Having dogs that have earned the freedom to roam off leash has been, well, I simply can’t overstate the peace and enjoyment it has brought me.

My heart aches for my friend. To me, Enzo has always been a part of Douglas, a part of Rose River Farm. And in a way he always will be. But he will also be a part of me and the life I have built with my dogs. I can’t ever repay a gift like that.

Rest in peace, Enzo. I hope where you are there are countless wild birds, endless cool mornings and open fields that stretch forever. And at the end, a warm fire by which to rest. Hunt hard, sleep deeply. There are no more commands, you’re already here.