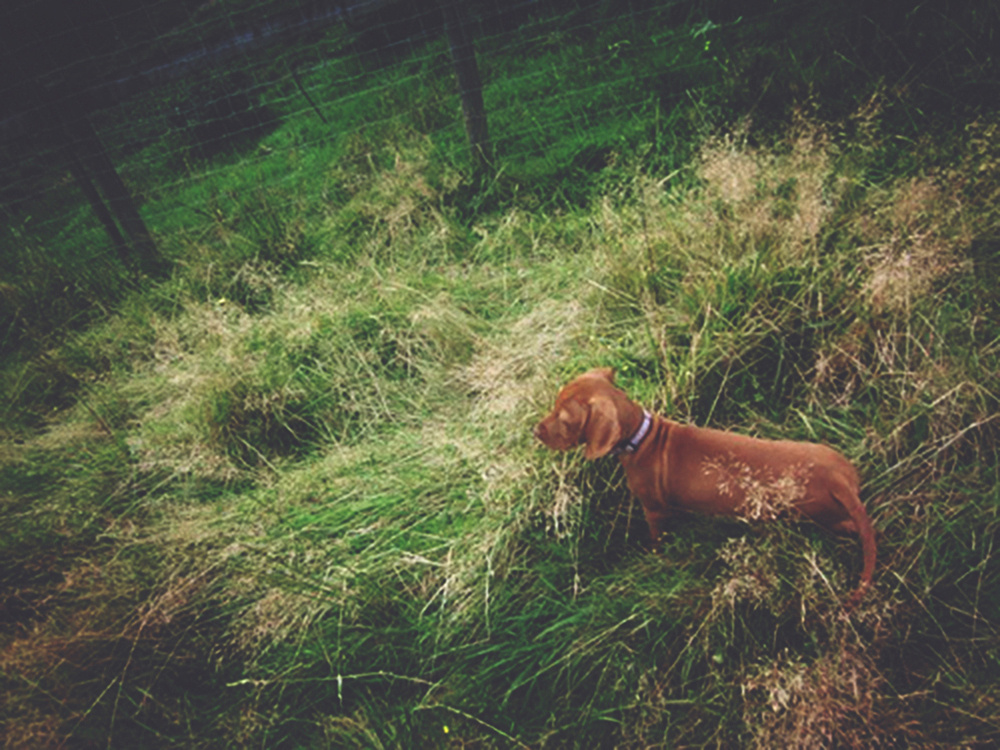 Jeanna Jones approached her house holding the saddest thing you can ever bring from a visit to the vet: an empty collar. Before the front door even opened she could hear the wails of the one-day-old litter inside. Eleven healthy Vizsla pups cried for their mother, Mabel, whose collar Jeanna still clutched in her hand. Jeanna cried too, but knew there was little time for grieving. There were mouths to feed. Lots of mouths.

The previous day was a long one, with puppies coming steadily at first, then with more time in between until, at last, there were 11. Mabel was exhausted, of course, and so was Jeanna, for that matter. But nothing about the day gave any indication how drastically, how tragically, events were to unfold in less than 24 hours.

All 11 Elves — as Jeanna now called them — made it through the first night, and Jeanna spent some time in the morning on Facebook, catching friends, family and fans up on the puppies’ progress. But later that day something went horribly wrong, and Mabel was rushed to the vet, stricken with sudden, severe gastric torsion.

She was hurried into surgery, but was lost on the table. Jeanna, shocked and grieving, shared her burden with hundreds of friends on facebook, most of whom she had never met, many of whom were anxiously awaiting happy updates and puppy pictures.

On that lonely drive home, Jeanna’s heart ached and her mind raced. She would be immediately greeted with the daunting task of hand-feeding 11 puppies who have not eaten in hours. And as she reached home and approached that door, with that collar warm in her hand, she felt alone.

But already the supportive forces of friends unseen were at work. And before she even reached out, fellow breeders and friends near and far knew what she would need next.

Jeanna: Does anyone know of a lactating bitch who would accept a few pups to rear?

Minutes later she reported that all 11 had taken some milk from a bottle — a start. A very small start to a painstaking uphill journey, but a start nonetheless. For tonight, she thought, it would have to do.

As the Elves slept, comforted and warmed by Jeanna’s dog Tipli, sympathy poured onto Jeanna’s Facebook wall from every time zone. Overwhelming, sad surprise mixed with frustration at the distance that could not be crossed. So many friends wishing they could help had to resort to those hollow words from an ocean away: “If there is anything I can do, anything at all...”

The next morning, day three, brought warm, clean, beautiful pups thanks to the overnight efforts of Tipli. She had no milk to give, but cleaned and looked after the Elves and let them suckle. Tipli went outside to quickly take care of business and then immediately returned to tend to her adopted brood.

Many friends read Jeanna’s Facebook plea, but Jim Cooper was in a unique position to help. His dog Bessy’s own litter of pups had recently been weaned, and she still had plenty of milk to offer. He called Jeanna and offered Bessy’s services as a surrogate. Bessy, however, was in Sussex, England, several hours east of Jeanna. So the call for help went out on Facebook again, this time for transport.

“Network” is such an overused word in the digital age that it feels like it’s lost some of its meaning. But on the third night of the Elves’ saga, a network of supporters came together to collect a dog and transport her hundreds of miles to her hungry charges. Susanne Pope, a woman Jeanna had never met, started Bessy’s westward odyssey. Then Rachel Edmonds volunteered for the next leg. Finally Ros and David Wakeling relayed her to Jeanna, arriving at 4 a.m. and not a moment too soon. It had been a rough night of slow feeding, taking Jeanna so long to feed them all, by the time she was done with the last it was time to start all over.

When Bessy arrived (and after the news was gently broken to Tipli that she would have to share her pups) they were divided into two groups, with the four most needy pups feeding first.

Day four brought newfound hope, excitement and energy, and the most optimistic update yet.

Jeanna: So all 11 pups, warm, dry, clean, content, sleeping and full! Looking good! Their two foster mums are working in tandem - Bessy feeding them with Tipli cleaning and stimulating.

Little did those foster moms know, people from across the globe shed tears of gratitude for them for doing what simply came naturally. One feeding blurred into another, more rotations, an occasional rest, another sunrise and another night is conquered. And so it continued, initially in fits and starts, then more smoothly as everyone settled into their odd new routine. And just like that, the first, critical week was behind them. To celebrate, the Elves got collars and toys, and Bessy got a soft new bed.

When the day came for Bessy to pack up her new cozy bed and head back east to Sussex, before she left she took her pups — Mabel’s pups, Tipli’s pups, Jeanna’s pups — outside for the very first time, and introduced them to the big wide world. And they did exactly what puppies do. They played and chased and wandered. They sniffed and ate and rolled in muck.

In a peaceful, empty house, Jeanna lovingly bathed each pup. They huddled together, warm and dry, and slept. Meanwhile, Bessy arrived home safe and sound, bringing with her to Sussex a cozy new bed and the warm thanks of hundreds of people whose paths she will never cross, but whose lives she unknowingly changed, if just a little.

In the weeks that followed, one by one the Elves who touched the lives of so many strangers, joined their new families. They posed for pictures with grinning parents and laughing children. They went home to canine and feline brothers and sisters. And with them they each brought their Kennel Club registration, complete with names that befit their remarkable launch into the world: Addaci Answered Prayer, Addaci Ever the Optimist, Addaci Fighting Spirit, Addaci Gift of Love, Addaci Lasting Legacy, Addaci Positive Thinking, Addaci Amazing Grace, Addaci Grace of God, Addaci Hope Springs Eternal and Addaci Mountain of Miracles.

And if you only counted 10, you’re right. The last to leave is not leaving at all. She’ll grow up exploring the same earth she discovered with Bessy, hearing the same voice she heard the day she was born, and knowing the warm familiar comfort of Tipli by her side.

Around the house she is called Nyssa. In Danish, Nyssa means “Little Red Elf.” In Greek, just as fitting, the name means “Beginning.” But her registered Kennel Club name is as perfect a name as there ever was. She is and will forever be, Addaci Legacy of Love.

Originally published in The Huffington Post Blog under the title, "Dogged: How Perseverance (and Facebook) Saved 11 Puppies," May, 2012.