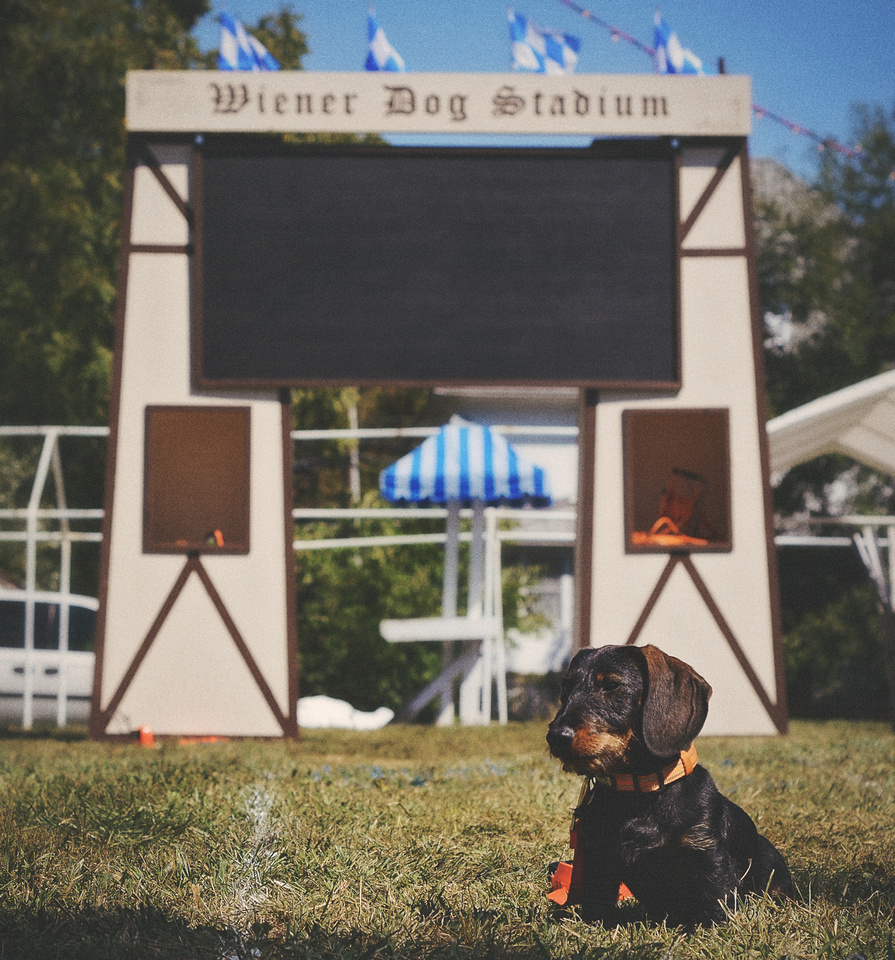 He is a miniature wire haired dachshund, born in the furthest reaches of northern Hungary, bred by the most decorated field trainer in the land. His father was a wiener dog racer. His father’s father was a wiener dog racer. And so it has been, through countless generations going back to his breed’s native Germany. And like the voices of his forefathers patiently teaching him the way of his bloodline, his very DNA engineered his cells, muscle and bone to assemble and grow and strengthen to do one thing: Run.

In his earliest steps he had already begun to refine the signature gait he uses with such force now as a 5-month-old. An unconventional three-beat rhythm that uses every inch of his body to maximum efficiency – stretch the front right foot as far as it will go and dig it into the ground. Bring up the left and hammer it into the turf alongside the right, all the while gathering his haunches behind him. His back legs held together tightly, bunny-hop style, slam into the ground at once with a crack that turns the heads of onlookers. He uncoils his rear end and propels himself forward, reaching out with the front right again, repeating the pattern, each stride faster and longer than the last. As he gains traction and builds momentum, the strides run together faster and faster until the individual steps are impossible to pick out. To the eye, he becomes a blur of ears and tail and dust and torn up grass. To the ear, the sound of a smooth, distant rumble of thunder.

The first of his family to make it to America, he flew 4,500 miles to his strange new home in Lovettsville, known as ‘The German Settlement,” home of the most prestigious Oktoberfest Wiener Dog race and stadium in the country. He was given the name Winslow, an English surname that means “Hill of Victory,” and immediately set out to live up to his name.

With only three months to prepare before Oktoberfest, he trained hard. When training on grass wasn’t enough, he asked that a strip of lawn be left unmowed to increase drag. When it was too hot to run, he did resistance training in the baby pool. And when he bored of training, he raced in the off-season underground circuit, pitting his speed against scrappy Jack Russells, sneaky fast Basenjis and giant, loping orange dogs who covered massive ground with each easy stride. He raced all comers, and left most behind in the red, Virginia clay dust he kicked up in his wake. But he had never gone up against other wiener dogs.

Every athlete knows there comes a time when the practice is done. On the morning of his first race, he woke early but was not anxious. He was awash in an eerie, focused calm. He picked out the collar with his lucky lightning bolt dog tag, did a few stretches and ate a light breakfast. He was as ready as he could be.

By far the youngest competitor in the field, Winslow was lowered into the starting box alongside another young rising star named Piper. Then the chants began. WIN-SLOW! WIN-SLOW! And when the gates opened, the frenzied crowd was just too much for young Piper. She hesitated. Winslow took advantage and breezed to victory in his first sanctioned race.

But even the great War Admiral had his Seabiscuit. Winslow drew Sasha in the quarterfinals. Sasha shot out of the gate like a cannon and Winslow looked to his right and saw something he had never seen before: the back end of a wiener dog. He dug in and pushed hard, but it was too late. Winslow could not overcome Sasha’s blistering start. She crossed the finish line, handing Winslow the first defeat of his career, and went on to take third in the meet.

The legendary Kaiser secured his dynasty, winning the championship for the third straight year. Meeting with media after the finals as his handlers hinted toward possible retirement, Kaiser seemed distracted by the gathering crowd further down the track. Fans who traveled from across the region to cheer for Winslow surrounded him for photos and a chance to hold him.

Some who were down on the track that night swear they saw the sea of people part just enough for Winslow and the great Kaiser to make eye contact and exchange a few unspoken words. Perhaps it was Kaiser giving a nod to Winslow, bowing out to clear the stage for a new King. We’ll never know for sure. But I choose to believe it was Winslow doing the talking, respectfully asking the champ to stick around one more year. “I’ll be back next year stronger than ever,” I can imagine him saying. “Give me a chance to beat the best.”