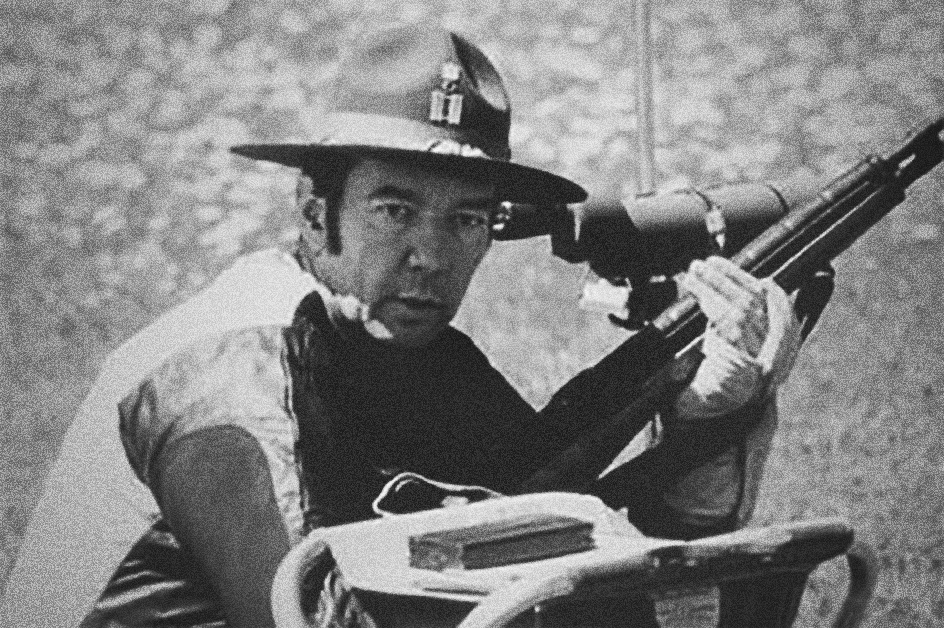 In August of 1977 I climbed into my Dad’s truck, I think it was the green GMC but my memory could be playing tricks. I was 14 years old, and we were headed nine hours north to Camp Perry, Ohio on the shores of Lake Erie where he was competing in the National Rifle and Pistol Championships. Trips like this were, of course, precious to me. All that alone time with Dad.

Dad was a shooter, and was accomplished in so many disciplines of shooting I honestly don’t know how he found time to work, be a husband and father, raise an idiot and my sister, train a bird dog, load his own ammo and play poker with his buddies, all while competing as an elite level marksman. Black powder, skeet and trap, bird hunting, deer hunting, and the purpose for our trip, high powered rifle target shooting.

He was already sick with cancer and losing weight and hair in ’77, but he earned the right to be at those championships and by God he was going to shoot. The previous year he secured a place on the prestigious National Civilian Rifle Team, and two years before that at Camp Perry he was awarded the Distinguished Rifleman Award. Only 125 men in the country earned that badge in 1974, I used to know but I think fewer than 20 were civilians. He was incredibly proud. His specialty was long distance shooting without a scope. He shot an M1 in a prone position using iron sights to a target 600 yards away. He was fucking good. I remember he had to wait a long time for the badge to be made and sent to him, and it was a very big deal when it finally arrived.

But back then he was just my Dad and we were on a road trip and each took turns trying to come up with nine hours of conversation that was marginally interesting to the other. We joked and farted and watched corn go by at 70 miles an hour. He told me the one about the raccoon screwing the skunk and while the structure of the joke is lost, the punchline was, ‘I hadn’t had all I wanted, but I’ve had about all I can take.’ Probably a child services level offense nowadays.

When we arrived at camp, he encountered many men who knew him. Respected him. Were nervous to compete against him. But loved him too. Most hadn’t seen him in long enough that his gaunt face was surely alarming. He smelled different, from the medicine I imagine, and every few years I smell that smell somewhere, just a hint of it, and it puts me in that truck along with the beer and that heavy, sweaty leather shooting coat in the back that locked his weakening arms in place and kept that rifle steady. It was so hot during the competition his friends worried the time in the sun wearing that coat like a straight-jacket would be too much for him.

He competed in the heat for two days, I believe, and on the afternoon we were leaving, the truck was packed but it took him hours to say goodbye to everyone. He didn’t say it, but he knew it would be the last time he would see almost all of them. Imagine that. I sat in the truck with the air conditioning on full blast, my feet on the dashboard, listening to the radio. The report came.

Truthfully, I didn’t know or care much about Elvis back then, and I honestly didn’t know if it would be important to my Dad either. He made his way back to the truck and got in. He said, “Ready?” I replied.

I can picture him exactly, his right hand on the automatic shift lever ready to put it in drive, but frozen as he looked at me. “What?”

“It just came on the radio.” We both stared at the radio until the commercials ended and the report came back on. I felt funny. It was weird to tell him something of importance that he didn’t already know. And I was surprised at his reaction. I never heard him listening to or speaking of the man, but he was impacted by this news. We rode in silence for a long while, listening to the radio, windows down, until a fart and a giggle broke the spell around the Pennsylvania line.

My Dad never competed again, and died at 42, fourteen months later. Elvis outlived him by six weeks. Jesus, can you imagine? I mean, all due respect to Elvis, but come on.

Funny how memories are all tied in and mixed up, I think. The smell of Dad’s shooting jacket, Lake Erie in August, the sound of an old truck radio, the heat, the look on his face when he heard the news. All one moment of mixed senses, and a moment I’ll never forget.

The King has been gone a long time now. Elvis too.

Rick Horn(non-registered)
My Dad died at 57. I, too, thought that he would be around for many more years. I had prepared to take my first big bird hunting trip west. I mentioned that I should ask my Uncle Charlie. It was the worst when my Dad said that he might like to go. I felt like a butthead for not asking but knowing he was in bad shape. Bummer.
No comments posted.
Loading...
© Ed Felker
Powered by ZENFOLIO User Agreement
Cancel
Continue