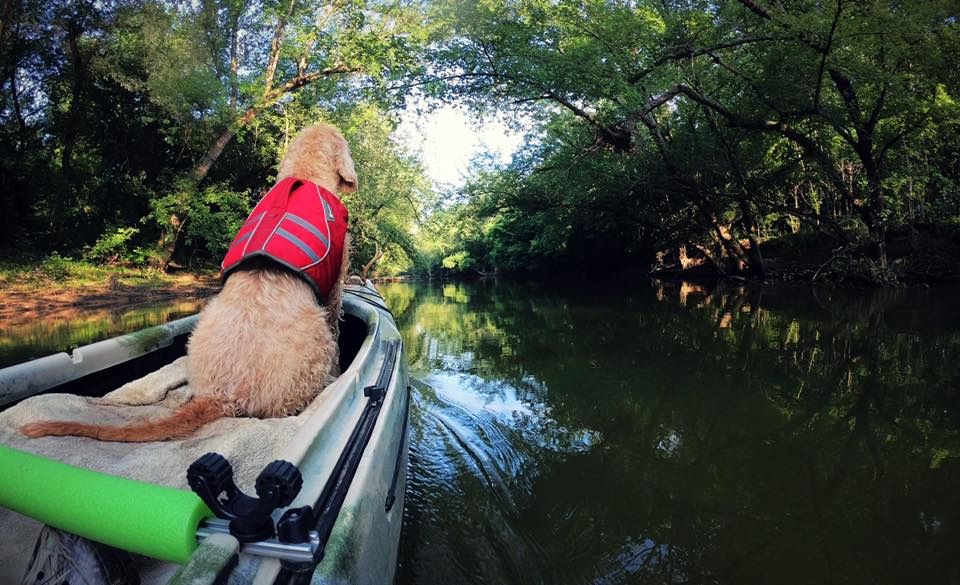 I went out early to beat the heat, and basically had the river all to myself. I let the current take me downstream at her pace, only making little directional adjustments here and there. I fished a little to pass the time but lost interest with the distraction of the weighty, wooden box in front of me. So two or three miles past our house, I opened the box and removed the bag of ashes. I also opened a beer, because Winnie genuinely loved beer. And one of the countless great things about dogs is, they don’t have a stigma about cracking a cold one at 8:20 a.m. They are good like that.

When the moment felt right, I tipped the ashes out of the bag and watched the river take them away in a white cloud. I like to think that I have a fairly good grasp on my feelings, but I was stunned by the immediate, intense, visceral wave of absolute grief at the sight of it. The ashes quickly dissipated into a featureless haze in the water behind me, like the reflection of a cloud missing its counterpart in the pure blue sky above. Fitting somehow, I thought, as I watched until distance and time and water all blended it to nothing. I shared my breakfast beer with the river and drifted downstream. I reserved a bit of the ashes for a keepsake project, and stopped to collect some smooth river rocks my friend is going to polish for me so I can arrange it all in a glass globe or bottle.

Later in the day, the weight of it all still very much on my mind, I stopped in for a beer at Idiom Brewing. I sampled a few hazy IPAs, selected one without paying attention to the name, and scanned the bar for a seat. The small L-shaped bar had one open spot at the far end. When I walked around the corner of the bar, I saw the space between the last occupied seat and the empty stool next to it was filled with a large dog lying quietly on the floor.

I asked the man, “Does your dog mind if I sit here?”

“Not at all,” he said with a smile. Then looked down, “Winnie, move out of the way.”

“Yeah, she’s really friendly.” Which I already knew because she was now sitting up, literally *smiling* at me. I told him briefly about my day so far, and why I must appear as if I’m about to cry at the mere mention of the name of his dog. He introduced himself as Sean. I set my beer down and asked him what he was drinking.

“That’s what you’ve got,” a voice from behind the bar said.

The bartender pointed to our beers. “That’s what you’re drinking.”

And that’s how it came to be that I was at a brewery drinking a beer called Kindred Spirits with a stranger and a dog named Winnie on the afternoon of the day I spread the ashes of my canine soulmate named Winnie in the river. When those beers were empty I bought another round of Kindreds, and Sean and I raised our glasses to Winnies past and present.

I told the bartender I would need a four pack of Kindred to go, and asked if I could buy the glass. She said, sure, I’ll get you a clean one. I stopped her. I don’t know how the universe works, or how and why inexplicable connections happen. But I was connected to the moment in a weirdly powerful way. “Actually I know it’s weird, but I kind of want *this* one,” I said, handing her the glass I’d been drinking from. She saw me pondering explaining it and stopped me, “Of course,” she said cheerfully, and cleaned and wrapped the glass and put everything in the cooler for when I left.

Emotionally exhausted, I said goodbye to Sean and Winnie, and went to pay my tab. But the universe had one last bit of kismet in store. As my transaction was processing, my eyes wandered to the wall above the row of taps. There rested a little plaque in the shape of a dog bone that read, “I ❤ Winnie.”

And I always will.