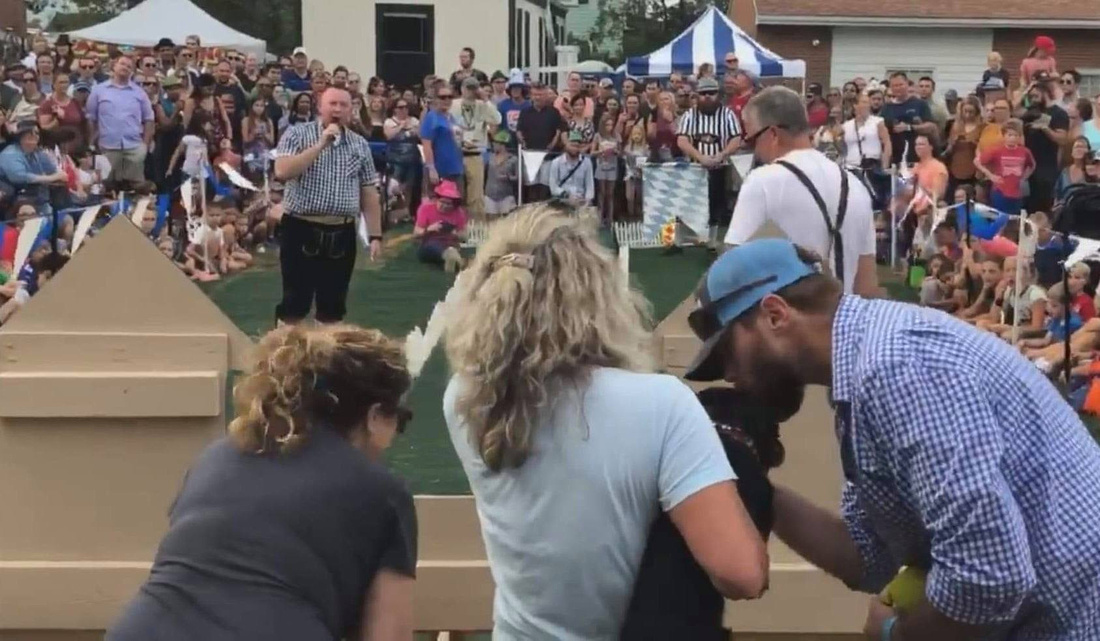 There is a moment captured in the video of the final match of the 2019 Lovettsville Oktoberfest Wienerdog Races. I am in the video, but walking away and unaware of what’s happening behind me. In the foreground, my friend Jason had started to follow me to the finish line where we were to await our dogs. In a few moments, either Jason’s dog Huck or my Winslow would be crowned the 2019 Champion. But just as Jason turned to leave the starting box area, he turned back and quickly kissed Winslow on the head. For good luck, or thanks, or affection, or respect, I couldn’t say. But to me that single frame of video, more than any other image, encapsulates the specialness of this friendship, and of this day.

To try to put it all into words, though, if you’ll indulge me, we’ll have to go back a few years.

Jason and I knew we were kindred spirits months before we met for the first time at these same Oktoberfest races three years ago. Our friend Dan Reilly connected us because we are both fond of the outdoors, passionate about beer, and flat out obsessed with our dogs. Jason planned to enter his dachshunds in the upcoming races, so we got to know each other mostly through trading online barbs and lofty brags in the weeks leading up to the races. When the day came, Jason and I met for the first time, while our dogs met in the first round. Winslow beat Huck that day, but what began there was the furthest thing from a rivalry. It was a friendship, first and foremost, but it was also a cooperative effort – a mission, really – to elevate the level of jubilant celebration of these dogs, and the shameless promotion of their races to a ludicrously grand scale.

Jason and I talk training strategies and methods all year long. And when summer begins to fade and the town’s attention turns toward Oktoberfest and the great celebration of the most glorious time of year, we are in daily contact about the races. We each had a new and different training strategy this year and we were both hopeful they might pay off on race day. But in a 16-dog, single-elimination bracket, anything can happen. While Huck advanced easily in his first round, Winslow forgot both his manners and his purpose in his first race, scrapping with his opponent but ultimately advancing after officials called for a restart. There were some noteworthy performances in the first round including a solid run from multiple 2nd place finisher Georgia, a fast and focused run from five-time reigning champ Kaiser, and an absolutely blistering run from a dog named Ringo.

In the second round, the ‘Elite Eight,’ Winslow regained his focus, remembered his training, and beat a beautiful dog named Pumpernickel. Kaiser, who hadn’t just won it all the last five years, but dominated, advanced handily over our friend Heather’s dog Maverick, who genuinely is just happy to be there being cheered. I was nervous for Jason and Huck, who were now facing a very fast Ringo. It was a close race called in favor of Huck by the referee at the finish line. It was challenged, but after a few anxious minutes the photo finish was reviewed and the ruling was confirmed, Huck advanced, and the Final Four was set: Kaiser and Huck. Winslow and Georgia.

In the first semifinal, Kaiser, the larger dog of the two, led Huck by a head within a single stride of the start. Huck pulled even by the halfway point, though, and both dogs were running flat out. In a performance that reminds me now of Seabiscuit’s gutsy 1938 match race win over War Admiral, Huck simply refused to be beat. His strides got longer. He picked up speed. And at the finish line, once again it was too close to call. The crowd – ten or twenty people deep surrounding the entire course – seemed to hold its collective breath in the moment between the finish and the indication from the referee pointing the flag in the direction of the winning lane. He raised the flag, I pleaded to myself from the starting box, “Please please please,” and when the flag pointed to Huck’s lane, the crowd absolutely erupted. People on the town green at the opposite end of the festival had to have known something special had happened. This wasn’t just a cheer, this was a Tiger draining an eagle putt on Amen Corner to take the Masters lead on Sunday cheer. And with Huck’s second straight upheld photo finish review, Kaiser’s dynasty had fallen.

In the excitement of the moment I almost forgot that Winslow had to race next, but after hearty congratulations were issued to our friends, we settled down for our semifinal against Georgia, who happens to be the dog who knocked Winslow out in the third-round last year. When the lever dropped and the starting gates opened, Winslow fell behind almost immediately. But he closed the gap and crossed the line in yet another too close to call finish. The referee gave it to Winslow, but believe me, I was nervous about the replay. Alas, the photo finish showed that Winslow had indeed edged Georgia by a few inches.

Preparations for the race for third place between Georgia and Kaiser were getting underway as I walked back to the staging area. There was a surreal moment on my way past the board. My heart was still racing but I couldn’t say if it was from Winslow’s race or if I was still excited from Huck’s win over Kaiser. Regardless, I stopped to catch my breath and looked up at the board, realizing for the first time that Huck and Winslow were in the finals together. What happened in the current race didn’t matter. The field of competitors was cleared. The stage was set. There were only two.

I found Jason behind the starting tower, hugged him and said, “Our wildest dreams are coming true.” And if that seems like hyperbole, you don’t know us. Sure, we know it’s not the Masters or the Super Bowl, but it’s OUR Masters. It’s OUR Super Bowl. We both planned more details than anyone other than our wives would believe to prepare and give our dogs the best chance for success. We wanted to do well, obviously. Everyone does. But what we wanted more than anything was for one of us to win it all. And it was going to happen. And I genuinely didn’t even care which one of us it was. Not even a little bit.

The Championship, we learned, would be decided by the best of three races with a lane change after the first race. Jason, his wife Suzy, my wife Sandy and I all exchanged good luck hugs, and the girls put Huck and Winslow in their starting boxes. I stood and looked through the plexiglass panel at Winslow. He looked back at me. My heart was full. He has done everything I’ve ever asked of him. I turned and walked slowly to meet Jason at the finish line, stretching out each second, just trying to bask in it all a while longer.

When the gates opened, Winslow was looking right at me, running right to me. But I knew this was Huck’s day. Huck had hit his stride and seemed like he was getting faster with each race. He crossed the finish line comfortably ahead of Winslow, and we gathered the pair up and brought them back to the start. We switched lanes, I handed Winslow to Sandy and turned around. This is when Jason leaned over unbeknownst to me and gave Winslow a kiss on his head. I said earlier I couldn’t say if he did it for good luck or out of thanks or affection or respect. Looking back now, putting myself in the moment again, I think it was all those things, and I love Jason for that gesture.

The gates opened one last time and my heart dog ran to me with both our hearts pounding. He crossed the line and I joyfully scooped up the first runner up in the 2019 Lovettsville Oktoberfest Wienerdog Races. I have never been more proud of him, or more thrilled for our friends and their wonderful, winning, thoroughbred of a wienerdog, Huck. It was simply the best thing that could have happened.

Life has never felt more like Oktoberfest than it did that night. We drank like Germans and smiled like idiots and I carried Winslow around all night, a fourteen-pound feather. His feet finally touched the ground around midnight. Mine took considerably longer.